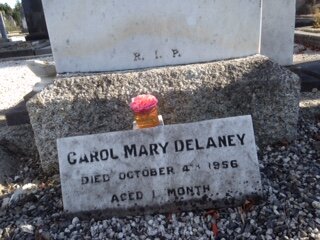 On grieving someone you never knew, by Dr. Susan Delaney

“She was tiny and perfect with a head of black hair. I called her Carol after my friend who died; they say you shouldn’t call a baby after a dead person”.  My mother didn’t bring it up often, but as a child and teenager, I hated when she talked about this baby who was born the year before me. I would like to think it distressed me to hear my mother’s pain, but I also think I just didn’t want to know about it.

It was only when my mother came to help me with my own first born daughter that I suddenly became interested in this story. Feeling a new mother’s fierce protectiveness for my baby girl and for the first time having an inkling of what it might be like to experience the unexpected death of a baby, we talked about Carol for hours. My mother was 24 and had a little boy, John, of nearly two. She was thrilled to have a daughter, but it quickly became evident that there were some medical problems.  “Something about her kidneys not developing”, was all she knew. The baby was taken to intensive care- my mother never held her, had no photos taken and nobody came to visit – that’s how things were done half a century ago. When my mother was discharged, the doctor told her to go home and take care of her little boy and the hospital would take care of her baby. She took this to mean she would be coming back to Dublin to bring her baby home before Christmas, but it was already clear to the medical staff that this baby was not going to survive. Was it cruel or kind to allow her to leave with this hope?  Did the medics truly believe that a mother could just move on from something like this? When Carol died, on John’s second birthday, my parents didn’t go back to Dublin and there was no funeral. The baby was buried in my grandparent’s grave and that was that. It seems incomprehensible to me that parents were not involved in the care or the funeral arrangements of their child, but these were different times. My mother was advised by her Doctor to have another baby (the way you might replace a dead goldfish) …and I was born a year later. I suppose for most people that closed the circle –“isn’t it great that they had another little girl?” but my mother continued to carry this disenfranchised grief throughout her life.

About 15 years ago I got curious about what had actually happened to this sister I never knew, and with my mother’s permission, I got her birth and her death certificates. I had a plaque made for her grave and I spoke to a cousin of my father’s who had, amazingly, worked in the NICU at that time and taken care of her for the month she lived. This long-retired nurse wrote a beautiful piece about combing Carol’s hair, and cuddling her as she slipped away. My Mum took huge comfort from knowing that even if she hadn’t been able to mother Carol, somebody else had. The little things that mean so much.

My mum and I still speak about Carol. We go to the cemetery once a year and she puts a single daisy on the grave.  Her grief re surfaced when my father died, she was saddened that now no one else would remember this child and that when she dies herself, memories of Carol will die with her. I have promised Mum that I will continue the tradition of putting a daisy on her grave on the same day each year that I phone my brother to wish him a happy birthday. This tradition will die with me, I won’t ask my children to continue it. Ultimately we will all be forgotten, and that’s ok.

Not surprisingly, I now work in bereavement, and I credit this to Carol; we are all products of our history. I sometimes work with maternity staff and am touched by the sensitivity and care they bring to bereaved parents. How things have changed for the better.

I found I had to process the realisation that if Carol had lived, she would have needed extensive care, and I, most likely, would not have been born, or at least my life would have been very different from how it turned out . I am reminded of our interconnectedness.  I wonder sometimes if she was lonely in the NICU, if she knew how much she was wanted, if she knew that she was loved. How odd to mourn someone you never met…. And yet how perfectly understandable.

Rest in peace my sister.